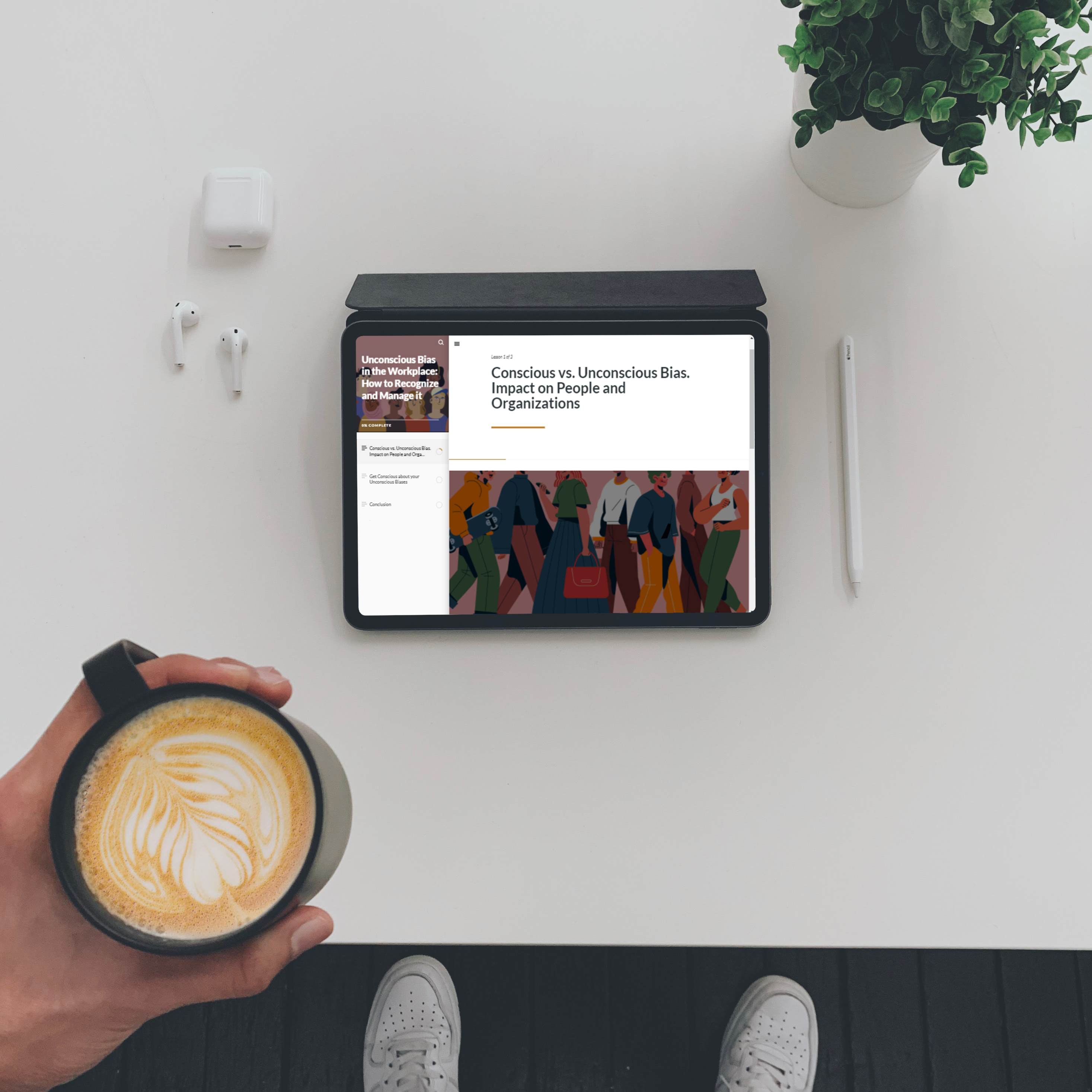 Project brief: The management team at a (fictional) large company is worried that the lack of diversity in the company, and especially in C-level roles, might be the result of implicit bias that affects decisions about hiring and promotion. They want to train key employees to recognize and manage their unconscious biases to minimize the impact of bias on relationships and decisions in the workplace.

Instructional design approach: I introduce the concept of unconscious bias by comparing and contrasting it to its more well-known counterpart – conscious bias, in terms of manifestations and impact. To achieve this goal I use a combination of short texts, an explainer video by ENEI, and a brief sorting exercise. I then offer the learners tools and strategies for assessing and managing their unconscious bias. At the end of the training learners are provided the opportunity to practice what they learned through a series of realistic non-graded job-related case scenarios.

We use cookies on our website to give you the most relevant experience by remembering your preferences and repeat visits. By clicking “Accept All”, you consent to the use of ALL the cookies. However, you may visit "Cookie Settings" to provide a controlled consent.
Cookie SettingsAccept All
Manage consent

This website uses cookies to improve your experience while you navigate through the website. Out of these, the cookies that are categorized as necessary are stored on your browser as they are essential for the working of basic functionalities of the website. We also use third-party cookies that help us analyze and understand how you use this website. These cookies will be stored in your browser only with your consent. You also have the option to opt-out of these cookies. But opting out of some of these cookies may affect your browsing experience.
Necessary Always Enabled
Necessary cookies are absolutely essential for the website to function properly. These cookies ensure basic functionalities and security features of the website, anonymously.
Functional
Functional cookies help to perform certain functionalities like sharing the content of the website on social media platforms, collect feedbacks, and other third-party features.
Performance
Performance cookies are used to understand and analyze the key performance indexes of the website which helps in delivering a better user experience for the visitors.
Analytics
Analytical cookies are used to understand how visitors interact with the website. These cookies help provide information on metrics the number of visitors, bounce rate, traffic source, etc.
Others
Other uncategorized cookies are those that are being analyzed and have not been classified into a category as yet.
SAVE & ACCEPT
Powered by